Fred by Beats And Instrumentals
3.04 out of 5
(35 customer reviews)

The appearance of this fifth volume in the Teen Beat series is a testament to its continuing popularity among thousands of red-blooded instrumental fans who have supported the series as it has evolved into the ultimate compendium of classics from the late 50s and early 60s.

Sadly, it seems this volume may be the last simply because the supply of hits on which the series depends has become exhausted. However, rest assured we are already busy formulating new instrumental concepts for those unable to satisfy their craving for those seemingly endless configurations of wailing guitars, blastin' saxes and thunderous drums, not to mention the odd keyboard blast, which make up the so-called ''instro'' genre.

We hate to compare like with like but Volume 5 is arguably the best Teen Beat yet, because it most accurately reflects the spirit and musical diversity of the times, while retaining its cohesion as a listening experience. There are surfing classics - Point Panic (Surfaris), Penetration (Pyramids) and Boss (Rumblers) - R&B grooves spearheaded by Bill Doggett's groundbreaking Honky Tonk whose influence can also be detected in Sil Austin's Slow Walk, Doc Bagby's Dumplin's, 7-11 (Gone All-Stars) and Weekend by the Kingsmen - and pounding rockers, (Jupiter C by Pat & the Satellites), Leap Frog (Chuck Alaimo) and Paul Revere's Like Long Hair, all set against a rich backdrop of hardy perennials such as Last Night, Green Onions and Let There Be Drums. And there are half as many goodies again, almost all of them classics.

Surfer's Stomp (Mar-Kets), Let's Go (Routers) and No Matter What Shape (T-Bones) were three hits produced by Joe Saraceno, a business graduate from New York who migrated to California in the mid-50s and was working as an auditor for US Steel when a friend introduced him to someone in the record business. Fancying himself as a vocalist, Saraceno got together with a friend and lucked into a one-off hit (as Tony & Joe) with The Freeze in the summer of 1958. Emboldened by this seemingly effortless rite of passage, Saraceno became an indie producer specializing in studio-contrived rock instrumentals characterized by their razor-sharp production.

As always, it's the photos (including previously unseen pics of the Frantics and the Mark II), original trade ads and ephemera which bring it all to life and it goes without saying that the digital reproduction from primary sources is second to none. It's a winner! 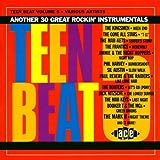